The Thunderbird that Came Down from Above
Red cedar, 36" x 2" 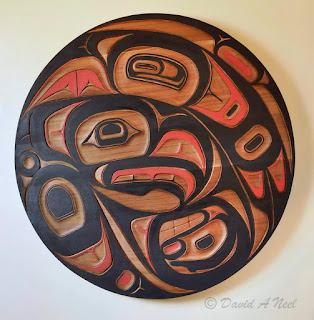 Many years ago a mighty Thunderbird came down from the Sky-world, transformed into a man and lived with the first ancestors. He took a wife and had many children, and taught them new skills that came from the Sky-world. Eventually he came to miss his world and transformed back into a Thunderbird and returned to his home in the sky. Today, when one of his descendants passes away the thunder shakes the heavens and rain pours from the sky, to remind the people of their origins.

Posted by David A Neel Artist at 9:37 PM No comments:

My latest print - "A Box of Light" 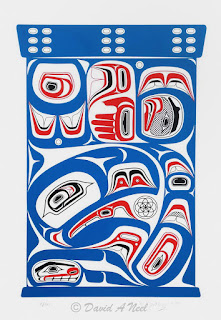 In ancient times, the world was dim and there was no sun in the sky warming the day. Raven, the trickster, learned that an old man had the sun stored away in a cedar box. He lived with his daughter in a big-house far to the north, and Raven decided that he would steal the sun from the old man. He arrived at the house to see the daughter drawing water from a spring near their house, and he transformed himself into a cedar sprig and fell into the water. A short time later the girl drank the water, and the next day she gave birth to a beautiful baby boy, who was the Raven transformed.
The old man was overjoyed to be a grandfather and loved to play with his grandson. He was greatly surprised to find that the baby grew into a toddler, then a young boy in only a few days. The boy was precocious and was played with everything in the house. The one thing that he wasn’t allowed to touch was the old-fashioned cedar box that the old man kept in the back of the house.
But the boy cried and cried until the old man finally gave his grandson the box to play with. The boy took it outside, seemingly to play with it outdoors, but as soon as he was outside of the house he transformed back into Raven, took the cedar box in his beak and flew away. He flew high, high into the sky, laughing at his own cleverness. But when he reached the clouds a gust of wind blew the box out of his mouth, and as it fell the lid opened, the sun escaped and floated up towards the sky world where it stayed; shining its light on the world below.

Posted by David A Neel Artist at 9:35 PM No comments: